Can You Get a DUI or OUI on a Boat in Arizona? 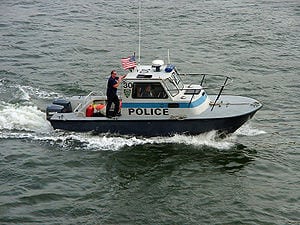 The short answer is yes. It is every bit as illegal to operate a motorized boat while under the influence as it is to drive a vehicle while intoxicated. The crime is referred to as OUI, or Operating Under the Influence, to differentiate it from driving while intoxicated. Every year the State of Arizona Game and Fish Department, with help from other agencies, has active OUI patrols and checkpoints starting in March and ending in September. In the Phoenix area the Game and Fish Department regularly patrols the following bodies of water: Lake Pleasant, Saguaro Lake, Bartlett Lake, Roosevelt Lake, Horseshoe Lake, Canyon Lake, Apache Lake, among many other lakes throughout the state.

According to Arizona Revised Statutes (ARS) 5-395, it is illegal for a person to operate a motorized boat while under the influence of alcohol or drugs.

ARS 5-396 makes aggravated OUI a separate and more serious crime. Aggravated OUI is defined as when a person has committed more than two previous offenses under ARS 5-395 or 5-397 in the last 84 months.

ARS 5-397 covers OUI crimes committed while extremely intoxicated. Individuals who are found to have a Blood Alcohol Concentration (BAC) of 0.15 or more at the time of the OUI are covered by this statute. It specifies longer jail sentences than ARS 5-395 and allows fewer exemptions from jail time.

Violating ARS 5-395 carries significant penalties. It is a misdemeanor crime that comes with a sentence of at least ten days in jail and a fine of $1,000 or more if convicted. In some cases, drug and alcohol treatment may be completed instead of some or all of the jail time.

If you or someone you know has been cited for OUI in Arizona, please contact us immediately for a free consultation. Our offices can be reached 24 hours a day at (602) 560-4004. Or you can send us an email through our secure form.